I've been forgetting to breathe, well, holding my breath to hear the official word from the official members of the official intentional community that Ken and I have been "courting" since February. Using the word official is a bit misleading. Since they don't have much member turnover, every seven years or so, there's actually nothing 'official' about our joining process at all.

It's been an evolving, murky, pulse-quickening, intriguing, frustrating, exploratory experience in "process" and patience and personalities. Apparently, our initiation into the trials of a small intentional community in the Skagit Valley... Wahoooooooo!
Posted by Sarahj at 1:43 PM No comments:

Ever since high school, I've entertained myself by playing around with a string of words that could be a catchy (or truly retched) name for a band.

One particularly boring Study Hall in the airconditioned library at ISB had me making fun of heavy metal band names. I even drew up a logo and album cover for my make-fun-of-blood-and-gore-themed-bands called BLUDGEON. I'd bet I've spontaneously come up with 50 or so most excellent band names.

In the 90s when I read The Stranger religiously, I'd sometimes coo or guffaw with delight reading the music listings. Those 90s band names fed my love for pairing words. C'mon it's randomly delightful if you think about it: Smashing Pumpkins. Flaming Lips. Nine Inch Nails.

This morning, as my husband asked Noah, "Do you want yesterday's pancakes for breakfast?" -- and as I piped up, "Yesterday's Pancakes!" -- I remembered this silly word game that's taken me through the ages. And I had to record, for posterity, the cool-ness of a band that might be decide to call themselves Yesterday's Pancakes.

PS Maybe it's more of a 90s things. I just looked and the band names weren't all that interesting. Or, I'm just less hip.
Posted by Sarahj at 3:22 PM No comments:

After three years of apartment managing, I see the trends in what people most often leave behind. I get it, too. The hell of moving. Realizing you own way more stuff then you thought. Way way more stuff. That hall closet you open just when you thought you were close to done. Close to when you've had enough. I sympathize. Moving sucks.

I just never realized seeing the flotsam & jetsam would have such continuity. Objects of desertion I most often find - by the dumpster, or in the just-vacated apartment:

Because I'm all about balance... and not being pigeonholed by the Bacon/Sodiu 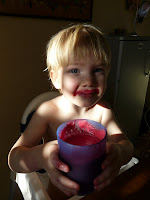 m Explosion -- here's Noah enjoying something frothy: beet, apple, lemon in a liquid state. The boy barely eats veggies, but he loves sure drinking 'em.
Posted by Sarahj at 4:55 PM No comments:

A Hop on the Bacon Explosion Bandwagon 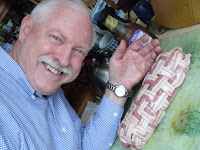 Hopping, or any form of light step, may no longer be an option after indulging in this meaty fest of vile pig delights. Ken keeps shuddering. He didn't realize just how squeamish he was until the B.E. rolled along today. It's baking in the oven right now. We're also not too sure what it may do to our insides. Hm. Maybe this is where the "explosion" part of the moniker comes in.

Let's back up here though.

Of the zillion (mostly) entertaining-but-way-too-many-to-keep-up-with forwards and You Tube links and jokes that land in my inbox -- the Bacon Explosion did catch my crispy-fried-meat-lovin' eye. And eye for the grotesque. I had no idea yet that it was "an Internet sensation," as described in its very own Wikipedia entry from January 2009. I did handpick a small number of folks I knew who would truly appreciate something like the Bacon Explosion. My dad. Doug. Kathy. Colleen.

My dad emailed back, "Fabulous! Let's do it!"

Take note that my father often teeters on the fine line between gourmand and glutton. Nitpicking aside, the delightful thing is that enjoying food makes him fabulously happy.

But still, I didn't take his comment seriously. Until a few weeks later he showed up from his three hour drive to my doorstep, grinning, with two pounds of bacon and two pounds of sausage. "All you need to add is the BBQ sauce and spice rub." There was no choice in the matter. Time to hop on the bacon bandwagon and enjoy the good life with my dad and lots of rendered meat.
I love being in the company of people who delight in small pleasures - and large bacon explosions. I love my dad.
Posted by Sarahj at 3:11 PM No comments: