Homebody Hardbody I am Not

I'm just not one of those folks who can exercise at home. Okay, I can't - and I don't want to. Part of the gift of exercise for me is - change of scene. Getting outside. Especially, now that I'm a parent - getting away. Sanity check. It's not all about the sweat (or the buns of steel, hah!).

Still, sometimes I wonder why I don't just carve out time to do an exercise video while Noah entertains himself. Rather than getting no exercise that day. Then I remember. He'd be interrupting me. He'd be in my space. It wouldn't give me what I need. Because exercise means clearing my head means: don't talk to me. Shhhhhhhh.

And just when I was about to lose my mind from a stretch of days with no break from the kids ~ when I felt this hot rage surge in my chest, caged animal feeling ~ I pleaded Ken my case and hopped my bike for a quick ride around Walker Creek. Found a trail I'd been curious to explore up at the Boy Scout Camp. Sunshine on the snow dusting the lowlands from last night cold rains. Soft tires digging into rocks and mud. The only sound my breath and my tires and the soft swish of my coat as my legs pedal me along.

This is what I need. Shhhhhhhhhh. Only my breath and my bike and my quiet.
Posted by Sarahj at 11:57 PM No comments: 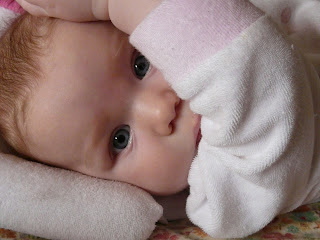 Four months old and wise as a sage. Katherine Isabella
Posted by Sarahj at 2:47 PM No comments: 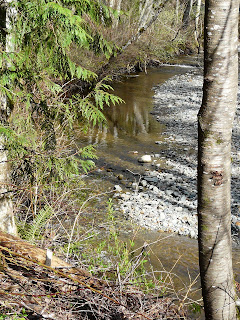 I can do it. I can start the fire and keep it going and bring in the wood from outside and crank up the generator and re-set the well pump when the water's not working and keep my baby in dry cloth diapers and drop everything to nurse her when she's crying and keep my four year old fed and alive and (somewhat) happy.

And, for the most part, keep my nervous system and brain mostly even keel.

That it's green and fresh outside and that I can hear the creek rushing by helps. A lot.
Posted by Sarahj at 2:33 PM No comments:

Girl Gets Out for a Night, Packs Breast Pump but Leaves Mama Hat At Home

I live on Capitol Hill, so I've been "among people" regularly since Katherine was born four months ago. But I've yet to go to a fullblown event out on the town. Til Last Night.

"Krishna Das and Deva Premal are playing tomorrow at the Moore. I'd like to go, but I've been doing lots of fun stuff lately. Why don't you think about going?" says my husband in a fit of thoughtfulness.

Cramming one last nursing session in at 15 minutes to showtime. She blows it all down my back, on to my pants, splashing to a puddle on the couch. Change, or eat? Food, I need food. There I find myself, among the spiritually fashionable, wearing a plain old shirt with dried spit up on the left shoulder.

But, spit-up-free Kimberly and I made it. On time.

Survey the scene as we're seated. The sheer number of prayer-shawl-like scarves: overwhelming. And I could feel a part of myself wanting to make fun of the bamboo flute player, standing in his shiny gold shirt, tight pants and bare feet.

And the moment Deva opens her mouth for the first sound of the first part of "Ohm"... I am instantly grounded, instantly released from cynicism, instantly transported. Yes, to a higher realm, there I said it. Have a listen to one of her CDs. You'll know what I'm talking about.

"Won't you join us?" she says. All us of there invited to sing along. Her voice spreads golden honey. Shakti. Love. Swirling feminine divine. I think of my sweet girl baby at home. Tears pool in my eyes from the swell in my heart.

We sit in silence between each song. Like the fourth sound of "Om": a + u + m + Silence. An integral part of the sound Om. After a few sets, darkness on stage, then Deva in soft light, kneels on stage. "Time to get down," she says with a wry smile.

I'm left fantasizing about waking up each morning to chant. Creating a community to join with me in chanting. Forget church. I've yet to find "my home" on Sundays. But Chanting? Yes. Chanting I think can be my church.
Posted by Sarahj at 12:15 PM No comments:

The lyrics from a song I listened to in the 80s came flooding back to me last year - without remembering its name or singer - and I was compelled to teach the words to my son Noah. Because it's a catchy fun song. Seemingly childlike, and he loves singing it, but I sometimes think, hmmm, will someone call CPS? (I mostly think that when he belts out the song among strangers. And because no one in the U.S. seems to know this song, so he sounds a bit nutty).

But this song and I go way back, I have a relationship with it, and that overrules any silly etiquette that might be appropriate in this case.

Here's the song as I heard it in the 80s when I lived in Antwerp, Belgium. It was a hit song, Top of the Pops and all that:

Thanks to the Internet, I now know that it's called "The Clapping Song," originally recorded by Shirley Ellis in 1965:
No one in the U.S. seems to know what the hell I'm talking about when I sing this song. I guess it was only popular in 80s Europe and 1960s America when it was in the Top 10?
Posted by Sarahj at 11:44 PM No comments: 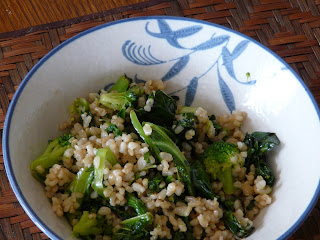 Noah often shows up next to the bed in the middle of the night. He crawls in the middle of us. Lately, he's taken to showing up with his little orange pillow... or his yellow giraffe... or, dragging his bright red quilt behind him. Sometimes ~ impressively so ~ he's shown up craddling and dragging all of it at once - plus his blue glass water bottle. It's sweet. Like he's moving in for the night. I love that little guy. B.Y.O.P., buddy. Crawl on up here. Bring Your Own Pillow.
Posted by Sarahj at 10:18 AM No comments: